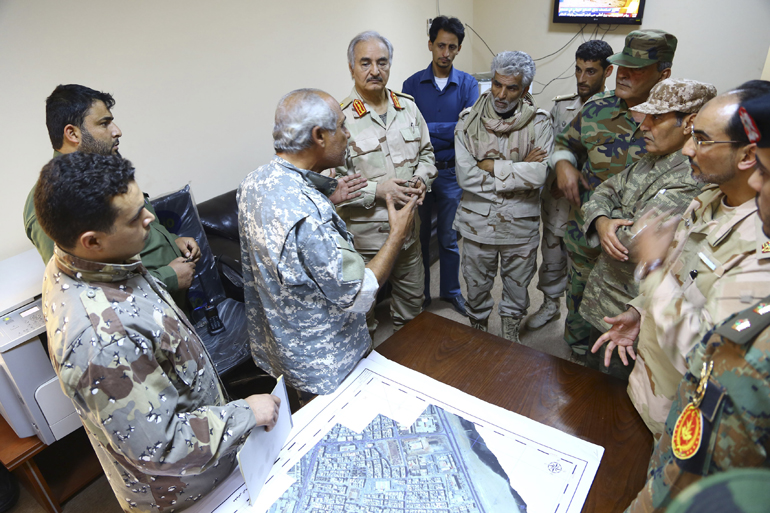 General Haftar (center) in a meeting with his officers.

The progressive destruction of Libya is consumed in a murky general disinterest, while there is an on going civil war between the two governments (the pro-Islamist of Tripoli led by Omar al Hassi and the “moderate” officed in Tobruk , led by Abdullah al Thinni) in conflict and a former loyalist of Gaddafi, Khalifa Haftar, who sentences the choices “ giving the cards” and who is the true “strong man” of the situation. In addition there are tribes, clans, interest groups that change the face according to need or convenience.

Meanwhile, Libyan oil production has plummeted to its historic low (and fortunately this happens when the price of the black gold is at its historical lowest price on the world markets), while the highest power is kept by the militia’s oil Cyrenaica, which now are fighting alongside the Thinni government, but which a few months ago, were fighting against it, in order to have a slice of the proceeds.

The pivot distribution of power in Libya, in its being still today unrepentant gheddafian , like for General Haftar, with his retinue of officers of the old army of the dictator, in fact shows how the rationality and foresight were unleashed in 2011, in the campaign to oust Gaddafi , and blow up a perverse but solid balance for decades.

In this mess you understand one thing: the growing role of Egypt ex (ex?) General Al Sisi as a trustee of the Western Countries in the fight against Islamic extremism and, in particular, against the extremism inspired by Muslim Brotherhood. Al Sisi in Egypt crushed the Muslim Brotherhood by a martial law, and keep providing weapons to Libya, as well as men and support, to the Government of Tobruk, for its self defence from the Islamist Tripoli.

It also explains the sigh of relief that half the world has pulled, when Al Sisi got ridden in Cairo of President Morsi and his government of the Muslim Brotherhood. It is enough to just take a look at a map , to realize , that today’s Egypt, with the Libyan civil war in the West, and Gaza and Israel to the east, and Syria a little farther to the east, is the true backbone of the stability of the Maghreb and Mashreq also . Whetether being pleased or not , with the generals, and their rude manners.